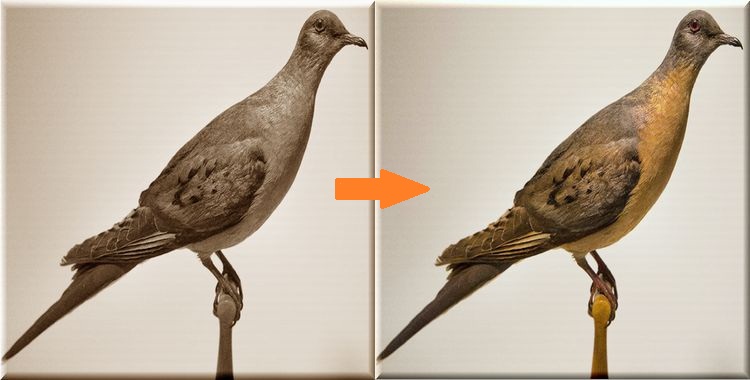 Jackson: Today we have with us Dr. Raymond Paul. He is a genetic engineer at Harvard Medical School working on reviving extinct species.  Dr. Paul, thank you very much for joining us tonight. It’s a great pleasure to meet you.

Paul: The pleasure is mine.

Jackson: Can you tell me how you got interested in genetic biology?

Paul:  Well, like almost every science-loving kid, I had a dinosaur period.  When I was ten, I already knew about one hundred scientific names of dinosaurs.  One day, a film came along that shaped my life ---Jurassic Park.  I was moved to tears when I saw a herd of Parasaurolophus peacefully grazing by the lake. By the end of the movie I was determined to be a genetic scientist and bring these beautiful creatures back to life with my own hands.

Jackson: Do you still believe in the possibility of reviving dinosaurs?

Paul: Sad to say, not any more. The more I learned about it, the less convinced I became that it’s possible. Then came the final blow. Four years ago, a team of Australian scientists found that the half-life of DNA strands is 500 years, more or less, even under the best conditions. That’s bad news for us.

Jackson: What makes that so discouraging?

Paul: Well, if fifty percent of a DNA strand breaks down beyond repair every five centuries, there’s no way any part of the DNA would remain intact after the 6.5 million years that separate us from the last dinosaurs. The group’s best estimate for the oldest readable DNA is only 1.5 million years.

Jackson: What extinct species do you think has the best chance of success?

Paul: Actually there has been a partially successful attempt.  In 2009, a species of mountain goat called the Pyrenean ibex, which became extinct in 2000, was cloned in Spain, but the poor baby goat died only a few minutes after birth.

Jackson: Oh, what a shame!

Paul: Yeah, it sure is!  In this case, somatic cells taken from the skin of the last surviving female were available, so direct cloning was possible.

Jackson: What kind of project are you engaged in now?

Paul: My colleagues and I’ve been working on reviving the passenger pigeon for a long time.  It’s a beautiful bird.  I’ve made it my life’s work to bring it back.

Jackson: When did the pigeon die out?

Paul: Just a century ago. Their flocks used to be so dense that they darkened the sky for hours, but, unbelievably, this wonderful species was wiped out by our species. They were slaughtered by the million for the meat market.

Jackson: Could you describe briefly how you’re hoping to resurrect it?

Jackson: Have there been any objections to your project?  After all, revived passenger pigeons might be regarded as invasive aliens in the environment today.

Paul: Passenger pigeons aren't aliens!  They were native to North America just a hundred years ago.  Is it so different from trying to protect living species from extinction?  Of course we are going to assess the impact on the environment before we release revived pigeons.  I believe we should right the wrong done by our ancestors if it’s possible.

Jackson: I couldn’t agree more.  I wish you good luck with your project.  Thank you very much for your time.